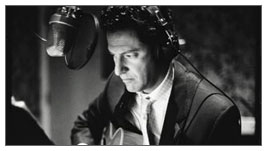 The show features "live" performances of their favorite songs and conversations with today's top performers like Tony Bennett, Diana Krall and Stacey Kent. They also play recordings by the icons of classic, pop and jazz like Frank Sinatra, Ella Fitzgerald, Peggy Lee and Mel Tormé, as well as recordings by the new stars of the genre like Michael Bublé, Jane Monheit and Peter Cincotti.

John Pizzarelli, already known as one of music world's great guitarists and vocalists, includes his in-studio band featuring his brother Martin Pizzarelli and a frequent guest is his father Bucky Pizzarelli, the legendary jazz guitarist who played with every major pop star of the 20th Century and the NBC Tonight Show Band.