Pat Metheny
And I Love Her

Over the course of a multifaceted career spanning four decades, GRAMMY® and Tony Award-winning jazz giant Dee Dee Bridgewater has ascended to the upper echelon of vocalists, putting her unique spin on standards, as well as taking intrepid leaps of faith in re-envisioning jazz classics.  Ever the fearless voyager, explorer, pioneer and keeper of tradition, the three-time GRAMMY®-winner most recently won the GRAMMY® for Best Jazz Vocal Album for Eleanora Fagan (1915-1959): To Billie With Love From Dee Dee.

Bridgewater’s career has always bridged musical genres. She earned her first professional experience as a member of the legendary Thad Jones/Mel Louis Big Band, and throughout the 70’s she performed with such jazz notables as Max Roach, Sonny Rollins, Dexter Gordon and Dizzy Gillespie. After a foray into the pop world during the 1980s, she relocated to Paris and began to turn her attention back to Jazz.   Bridgewater began self-producing with her 1993 album Keeping Tradition (Polydor/Verve)  and created DDB records in 2006 when she signed with the Universal Music Group as a producer (Bridgewater produces all of her own CDs).   Releasing a series of critically-acclaimed CD's,  all but one, including her wildly successful double GRAMMY® Award-winning tribute to Ella Fitzgerald, Dear Ella - have received GRAMMY® nominations.  Artist Theo Croker is signed to DDB Records and Irvin Mayfield and the New Orleans Jazz Orchestra also recorded a project with Dee Dee released by her label in 2014.

Bridgewater also pursued a parallel career in musical theater, winning a Tony Award for her role as “Glinda” in The Wiz in 1975. Having recently completed a run as the lead role of Billie Holiday in the off-Broadway production of Lady Day, her other theatrical credits include Sophisticated Ladies, Black Ballad, Carmen, Cabaret and the Off-Broadway and West End Productions of Lady Day, for which Bridgewater received the British Laurence Olivier Nomination for Best Actress in a Musical.

As a Goodwill Ambassador to the United Nations’ Food and Agriculture Organization (FAO), Bridgewater continues to appeal for international solidarity to finance global grassroots projects in the fight against world hunger. She is currently on tour worldwide in support of Memphis, her new CD, and in April of this year was the recipient of an NEA Jazz Masters Fellows Award with honors bestowed at the Kennedy Center in Washington, D.C.

Acclaimed vocalist/guitarists Raul Midón and Lionel Loueke open the show separately and together. 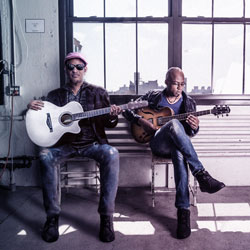 RAUL MIDÓN
Heralded as a "one-man band who turns a guitar into an orchestra and his voice into a chorus," (NY Times) Raul Midón has collaborated with such heroes as Herbie Hancock, Stevie Wonder, Jason Mraz, Queen Latifah and Snoop Dogg. Blind since birth, Midón produced-engineered his 2017 album, Bad Ass and Blind, using special computer software for the blind. The album, which confronts the challenges of his blindness with verve and grace, received a 2018 GRAMMY® nomination in the category Best Jazz Vocal Album. Midón's 2018 follow up release, If You Really Want, featuring the Metropole Orkest under the direction of Vince Mendoza, was nominated for a 2019 GRAMMY® award in this same category.

LIONEL LOUEKE
Benin guitarist and vocalist Lionel Loueke has received critical acclaim from both his idols and contemporaries on his latest release, The Journey. Paul Simon raves that Loueke is "one of a rare handful of guitarists that move effortlessly between his West African roots and modern American Jazz", and Sting cites Loueke as "one the most original, essential and inspiring musicians on our planet today.” As a Blue Note Recording artist and member of Herbie Hancock's band for the past 10 years, Loueke has recorded and toured with artists as unique and varied as Terence Blanchard to singers Angelique Kidjo and Luciana Souza. Praised by Herbie Hancock as “a musical painter,” Loueke combines harmonic complexity, soaring melody, a deep knowledge of African folk forms, and conventional and extended guitar techniques to create a warm and evocative sound of his own.

VIP Tickets
For a pledge of $400, you'll receive a pair of tickets for the Front Orchestra section - these are the best seats in the house! VIP tickets include valet parking, a donation and a one year membership. Plus, you'll be invited to an exclusive post-show reception with dessert, coffee, and wine at the Founder's Room at Walt Disney Concert Hall. You can only get VIP tickets through KJazz. Call 1-310-478-5061 or pledge online, you don't want to miss it!