Gene Harris
Everything Happens To Me 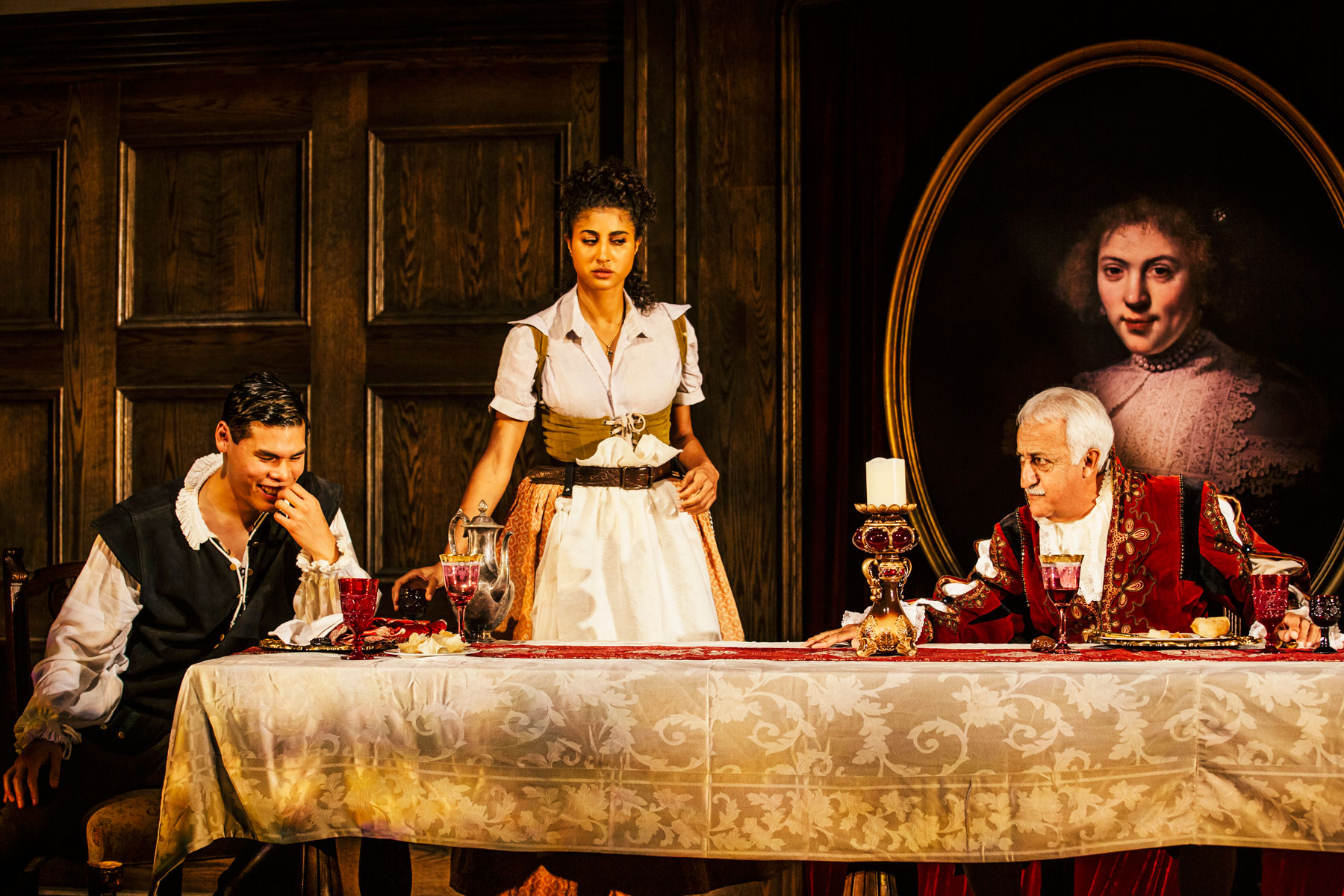 If you have neither seen nor heard of the odd little 1621 tragicomedy by William Rowley, Thomas Dekker, and John Ford called The Witch of Edmonton, worry not: all the best of it is alive and well in Jen Silverman’s devilish take, Witch, now open at the Geffen Playhouse.  Silverman winks at the audience with dialogue that might be overheard standing in line at—like, ya know—Starbucks, yet spoken by people living in Jacobean times, dressed in Jacobean garb.  This melding of the ages punctuates the truth that our mortal struggles are ageless: morality against desire, despair against hope, and the human inclination to shun those who are different.  All this struggle is the fertile ground upon which Silverman’s Devil—aka Scratch (the irresistible Evan Jonigkeit)—bargains for souls.

The actors keep a terrific pace set by Director Marti Lyons, who brings all her understanding of Silverman’s layered play from the 2018 world premiere of Witch in Chicago.  Her actors are specific, intentional, and never seduced to be in on the joke of Silverman’s witty dialogue.  Well done.

Handsome young Scratch, a devil acolyte who takes the form of a traveling salesman, has no trouble tempting poor young Cuddy Banks (the blazingly charming Will Von Vogt) into a deal of diabolical revenge upon his rival, strapping Frank Thorney (the commanding Ruy Iskandar)  who is hell-bent on snatching Cuddy’s birthright.  The rightful heir is in danger of being squeezed out of the name and fortune of his father, Sir Arthur Banks (the always spot-on Brian George), in part because it is suspected that his “favorite flavor may not be wife.”  Sir Arthur wants a proper heir who will surely bring sons and Frank, oozing with virility, seems the best candidate.

The two-faced devil also makes a deal with Frank to have a guaranteed spot at the top of Banks’s last will and testament. Cuddy, Frank, and the audience wait with bated breath to see if the Devil will make good on his promises. The surprise payoff is worth the suspense.

Scratch’s charms are irresistible to all but the village Witch (Maura Tierney)—the woman chased to a solitary life on the outskirts of town by the torches and pitchforks of whisper, rumor, and accusation of petty townsfolk. She alone is sober in her consideration of the Devil’s proposal, sending him into unknown territory. Like all of us, she struggles to resist.

In fact, the play could well be titled The Devil, as it is his machinations and existential crisis that underpin the ninety-five-minute one act.  Can a demon’s heart be softened and turned away from evil by the infiltration of love? Are deals with the devil simply self-fulfilling prophecies? What is the worth of a soul? And why do humans recoil at those they do not understand?  All questions posed in Witch.

Though a strong and beautiful presence, Tierney (“ER” and “The Affair”) would do well to leave her camera-ready television sensibilities at the stage door, for while she has terrific acting chops, she missed opportunities in her opening night performance for a clear change in her character’s arc.  In real life, as in live theatre, people are more obvious about what they are feeling—whether they intend to be or not—and feelings spill out as personal defenses drop under pressure.  Tierney is buttoned down to the point of obfuscation.

Rounding out the cast is Vella Lovell, earnest and fiery as the altogether sympathetic castle servant, whose misfortune elicited out-loud gasps and laughs from the audience.

Set in the smaller black box theatre (next to the fantastic Geffen mainstage production of Skintight), Witch kicks off the 2019–2020 season with a bang.

Get your tickets here.